Welcome To Columbia. The year is 1912. With the United States emerging as a world power, the floating City of Columbia is a mighty symbol of American ideals, launched with great fanfare to the cheers of a captivated public. But what begins as an endeavor of hope soon turns to disaster, as the city disappears into the clouds, its whereabouts unknown. The greatest accomplishment in American history has vanished without a trace.
The player assumes the role of former Pinkerton agent Booker DeWitt, sent to Columbia to rescue Elizabeth, a young woman imprisoned there since childhood. He will develop a relationship with Elizabeth, augmenting his abilities with hers so the pair may escape from a city that is literally falling from the sky. DeWitt will learn to fight foes in high-speed Sky-Line battles, engage in combat both indoors and amongst the clouds, and harness the power of dozens of new weapons and abilities. 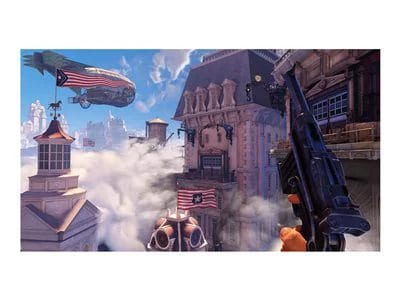 Continue the journey in the sky-city of Columbia, with more locations, characters, and weapons. The instant bonus includes four pieces of exclusive gear, weapon upgrades and skins, and five Infusion bottles.

Come back to Rapture in a story that brings Booker and Elizabeth to the underwater city on the eve of its fall from grace.
Developed by Irrational Games, the studio behind the original BioShock and BioShock Infinite, this DLC features Rapture as...

Set approximately 10 years after the events of the original BioShock, the halls of Rapture once again echo with sins of the past. Along the Atlantic coastline, a monster has been snatching little girls and bringing them back to the undersea city of Rapture....