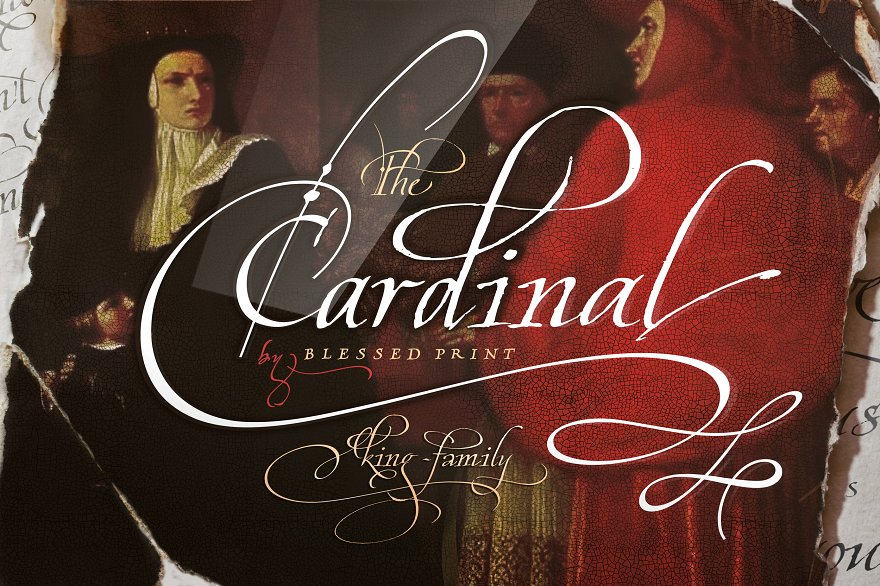 Cardinal is professional font-family by BlessedPrint that imitates italic handwritten calligraphy. If you are looking for a traditional italic script and plenty of elegant swashes with swirls than you are on the right place! Cardinal script was drawn with a real nib using china ink, high-quality paper. After that it was carefully scanned and finally implemented into the font. Cardinal italic consists of 2400 glyphs! Help and Character map: 1BC5h2kaqswwO4cXroydHrjQAKqRQ9UOl Each capital letter has 40 pre-made integrated swashes decorated with swirls. Everything you need is to type: A1, A2, A3 A40 Isn't it easy? Absolutely easy and fast. Just type and choose your preferable swash on the go. Not necessary to distract your self by opening a glyph panel. When you type !1 !2 !3 !80 you will get individual decorative element that can be combined with any letter in any place. HOW TO GET ACCESS TO ALTERNATES? Absolutely easy! Just type a number after any letter or use Glyphs panel. Capital letters have 2-10 options. Type A01 or B2 and see how it works. Scroll down and start testing it! Lowercase letters have 5-20 options. Type: C3a1rd4ina2l15 and see how alternates, swashes will appear. Turn on your creativity, pick the best glyph and enjoy the result! This method is super fast and makes designer's life so easy!Especially if you work with older version of Photoshop which simply doesn't support Glyphs panel. All characters are available through Glyph panel as well, even more each of the alternate letter has it's own unicode PUA so you can copy/paste from Apple Font Book or Windows Character Map. Total amount of glyphs 2400 OPENTYPE FONT-FAMILY - Discretionary ligatures - Stylistics alternates 1400 - PUA private use areas - Compatible with SILHOUETTE & CRICUT DESIGN SPACE - Multilingual: supports most European languages --- - Cardinal works in Photoshop, Illustrator and other Adobe programs. - Cardinal works in MS Word. WHAT IS INCLUDED Cardinal-Italic.otf Traditional italic script with 2400 glyphs. Includes plenty of alternates for each single glyph, many swashes, decorative elements and other. Cardinal-Sans.otf Secondary font with Italic Sans appearance and wide tracking. Also has handwritten draft appearance and pair with Cardinal italic script. Cardinal-Serif.otf Another secondary font with Italic Serif appearance and even wider tracking. Same handwritten draft appearance and also pairs good with Cardinal italic script. Cardinal-Elements-Regular Decorative elements saved as individual font. Help and Character Map Help file with most common questions and character map. The Cardinal Italic doesn't include TTF file. --- PERFECT FOR - wedding invitations - stationary - logos - postcards - letterpress address - titles - Menu - diploms --- Need help? DO not hesitate to contact me. Do you like my job? Please click like to appreciate THE CARDINAL script.